Skip to content
Posted on September 15, 2017 by Max Wilson

Two weeks ago Angie and I did something strange: we took a vacation. 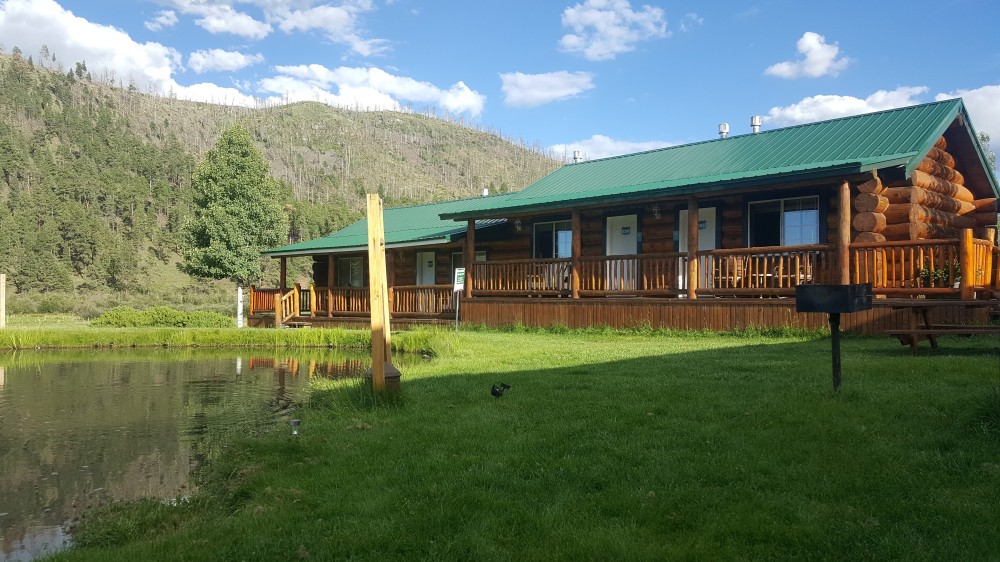 To be honest, I hadn’t really wanted to go. With Baby Number 2 coming just around the corner, and me nearing the end of my dissertation, I had wanted to stay home and keep working. Angie took the choice out of my hands, however, and we settled on a compromise: Jack would stay with my parents and we would take a quick trip to Greer. Looking back on it now, I’m happy we did.

Greer is just as far away from everything as it sounds. Nestled along the Little Colorado River, at the end of a highway that goes nowhere, it’s a solid four hours from Phoenix, and feels like a completely different world from the low deserts that make up a big chunk of the state. We hoped that it would be secluded enough for us to scratch the “get outside” itch without crossing the line into type two fun, and ended up in a “motel room” at the Greer Lodge, which was the perfect combination of rustic and comfortable. 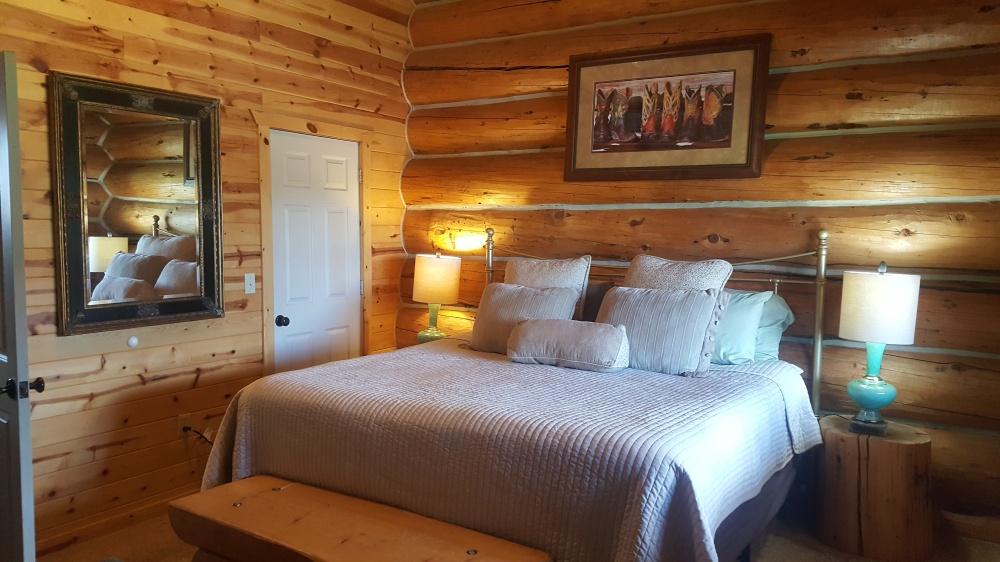 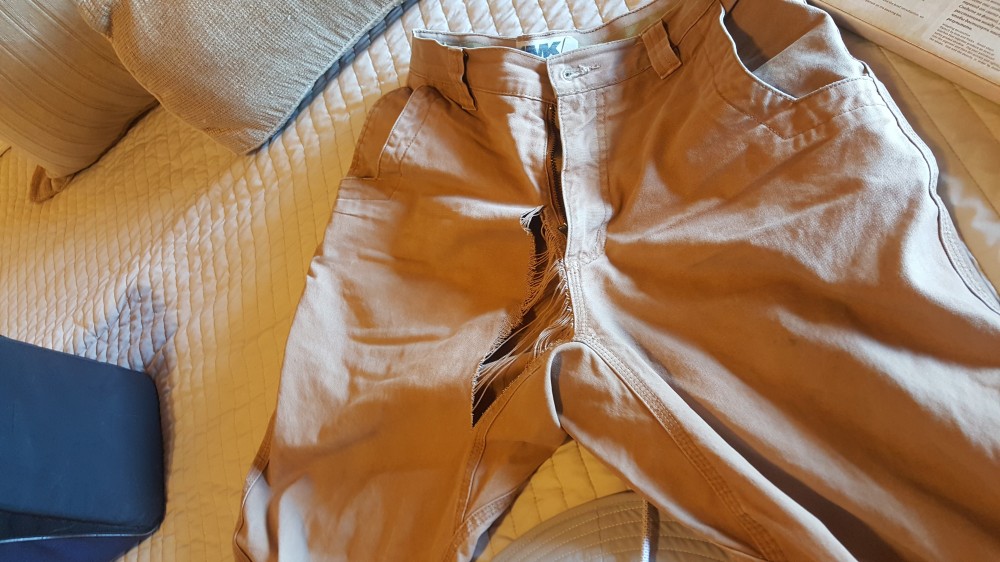 As I got out of the car my pair of trusty mountain khaki’s decided to not be so trusty. Happy that I had remembered to pack another pair of pants, Angie and I put the debacle behind us and wandered down to the Little Colorado River, which, as it runs through town, is a bow-and-arrow-cast-into-a-few-deep-pockets stream. 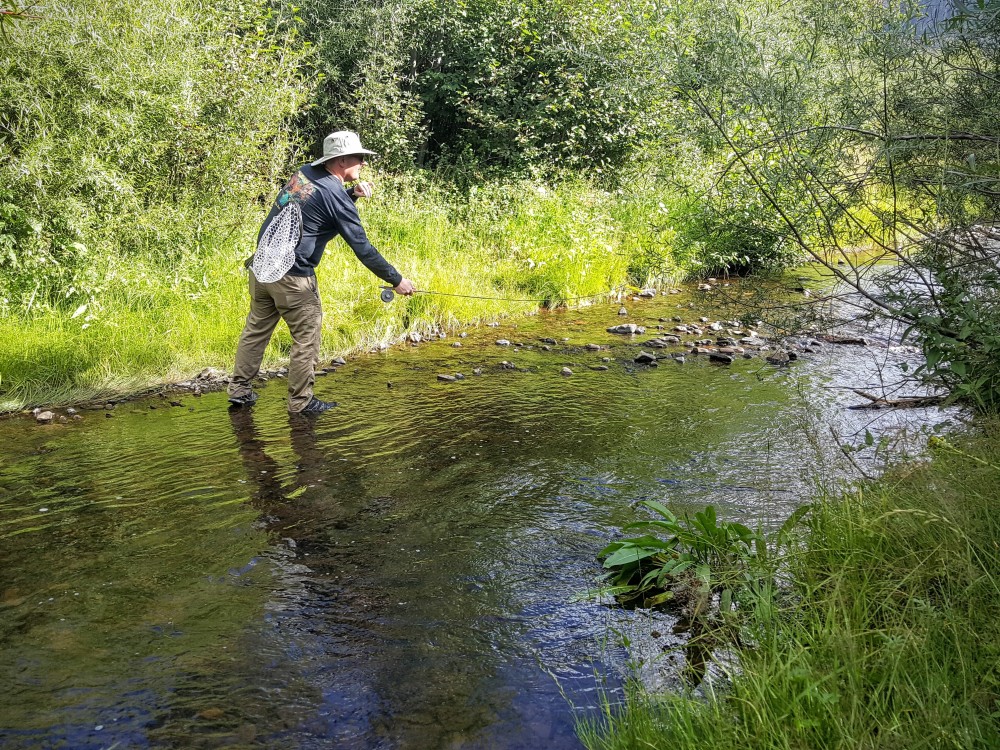 It was the middle of the day and the fish weren’t biting. Angie was getting tired of watching me catch nothing, so we walked back up to the lodge for a little R & R.

Unfortunately I am terrible at R & R. About 30 seconds after we settled in our hotel room, I started fidgeting. Within 10 minutes, I was desperate to find something to do when the small ponds just outside our door caught my eye. 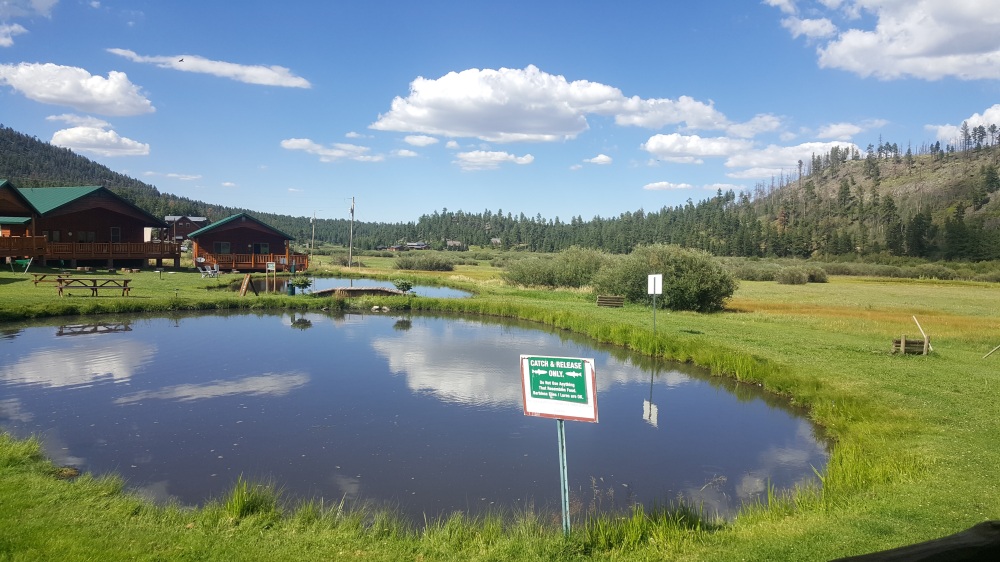 It might not have been the most sporting thing in the world, but at least fishing these little ponds gave me something to do. I set up my rod, grabbed a glass of my favorite libation, and headed down to a pond I was fairly certain had no fish in it.

Except I was wrong– there were a great many fish! I fished the pond until just before dinner, when I finally hooked up on something big. The fish bent my poor little four weight all the way to the cork, and we fought for a good five minutes before it launched itself out of the water and threw my fly from it’s mouth.

“What is this, your white whale?”

“Call me Fishmale,” I replied.

In the morning I decided to do a little serious fishing, driving over the pass to the Black River. Around Three Forks, I noticed what looked like a deer facing away from me, standing on the side of the road. As I pulled up behind the “deer,” I kept thinking it looked strange, until finally it raised it’s head: 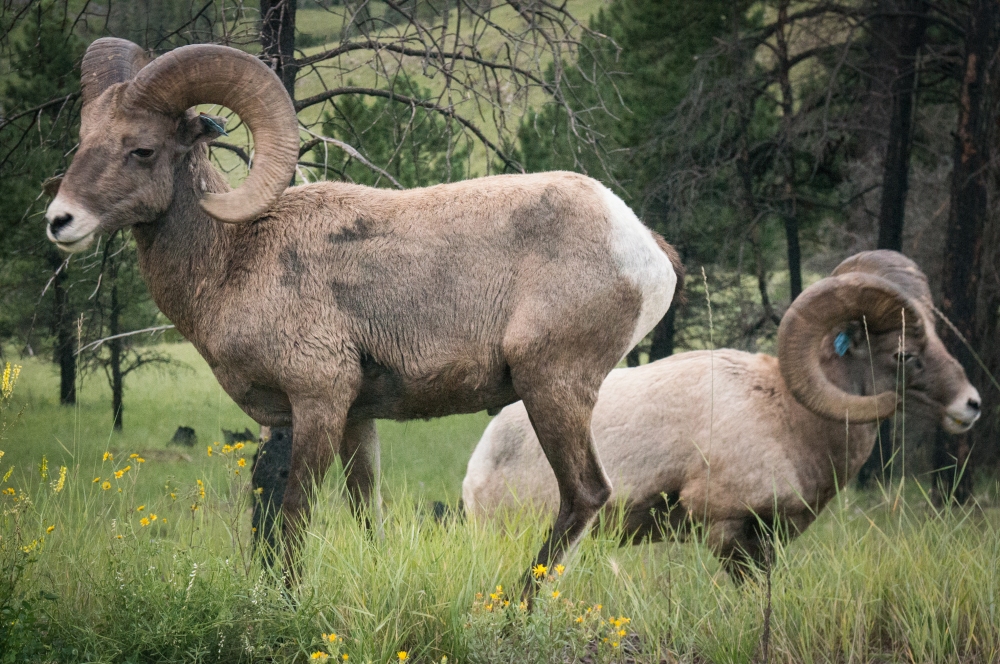 Nope, not a deer. Thank God I learned my lesson from the wolves last time I was in the White Mountains and actually had my camera in the front seat with me.

The Black is one of the hidden gems of North American fly fishing. It offers everything. Near the headwaters it is a tiny mountain stream hiding native fish. As you move down, the stream grows, turning into a tight, fast creek, before finally opening up into a full fledged trophy brown trout river. Best of all, it is far from everything and the little fishing pressure it attracts tends to stick close to a few easy access points. If you are willing to walk (and get wet) you can have a blue ribbon trout stream all to yourself.

Knowing I didn’t have much time before Angie got upset with my little excursion durring our couple’s retreat, I headed straight for my favorite hole and tied on my favorite summer set up (an Arizona Wanderings Mini-Hopper with a small caddis dropper). Results were fantastic. Over about half an hour I’d caught one big fish: 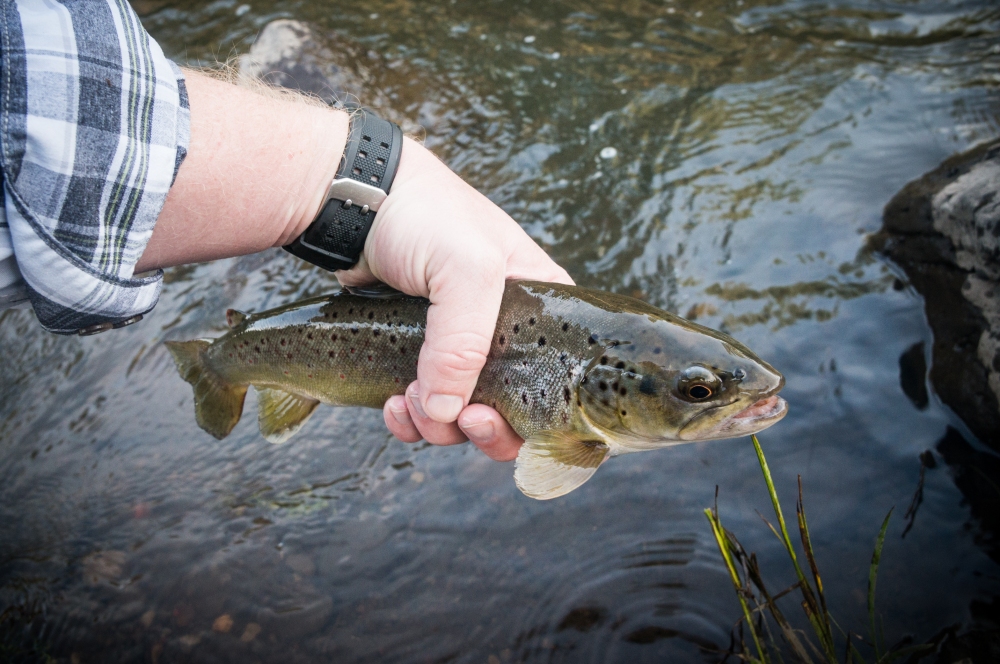 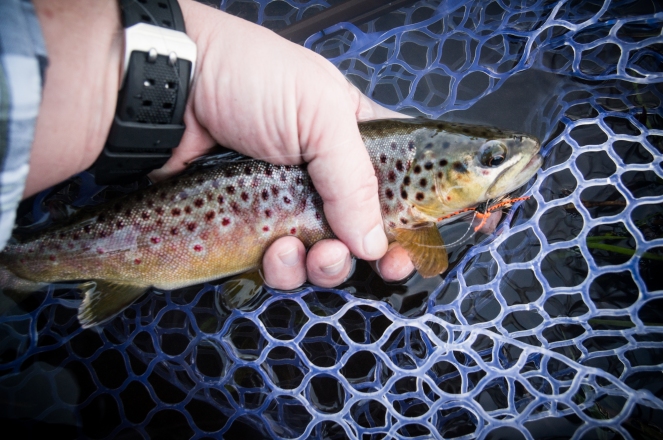 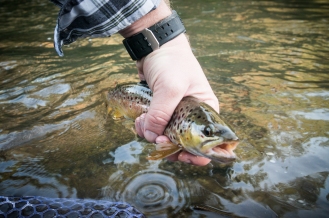 And so many little guy’s that I got sick of taking pictures.

But time was short. I had a couple of miles to walk back to the car, an hour to drive, and a pregnant wife who was expecting me in time for breakfast. I fished back to the car. 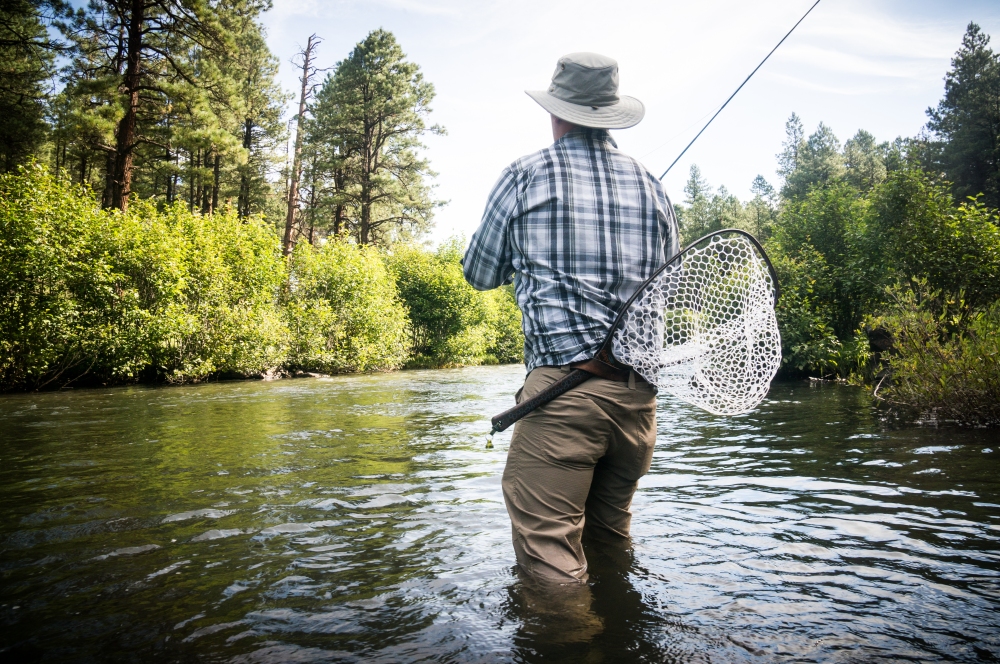 In Greer Angie and I sat down for an incredible breakfast before heading up the chairlift at the nearby ski resort, where we made sure to get a bump picture.

Afterwards I talked Angie into driving back down to the Black and trying some of it’s more accessible regions. She got out her tenkara rod a fished like a champ.

Unfortunately it was the middle of the day on an easily accessible reach of the river and the fish just weren’t to be had. After about an hour, with a summer thunderstorm bearing down on us, we decided to call it a day and head back. I didn’t mind too much, I still had some unfinished business in the lodge pond, after all.

By the time we returned, the rain had subsided and the fish in the pond were biting again. Angie and I both set to work, with her hooking up on a nice rainbow that we lost just as it was being netted. One of the kids staying at the lodge was particularly interested in what we were doing, so I invited him over to try fly casting. Because I am an idiot I forgot to ask his mom it it was okay to put his pictures up on the blog, so you’ll just have to trust me that after 10 or 15 minutes we had him getting casts on the water. Eventually he got bored and handed me back the rod. On the very next cast, boom:

No, it wasn’t the monster I’d seen the day before, but white whales aren’t meant to be caught. Still, it was a good fish and I was happy to get him back in the water before it was too late. In the morning it was time to head home and we were sad to go.

I thought a long time about whether to write a post on this trip or not. After all Lesser Places is a blog about lesser places, places that are difficult but ultimately worthwhile. A weekend trip to a beautiful hotel is not that. So, case you’re bored, let me tell you a story about the Grand Canyon. I promise it will all connect in the end:

When I was in fifth(ish?) grade I faced my first real challenge hiking. My family had taken a quick trip to the Grand Canyon, where we decided to hike about half way down to Indian Gardens. As you might expect, going down was easy. 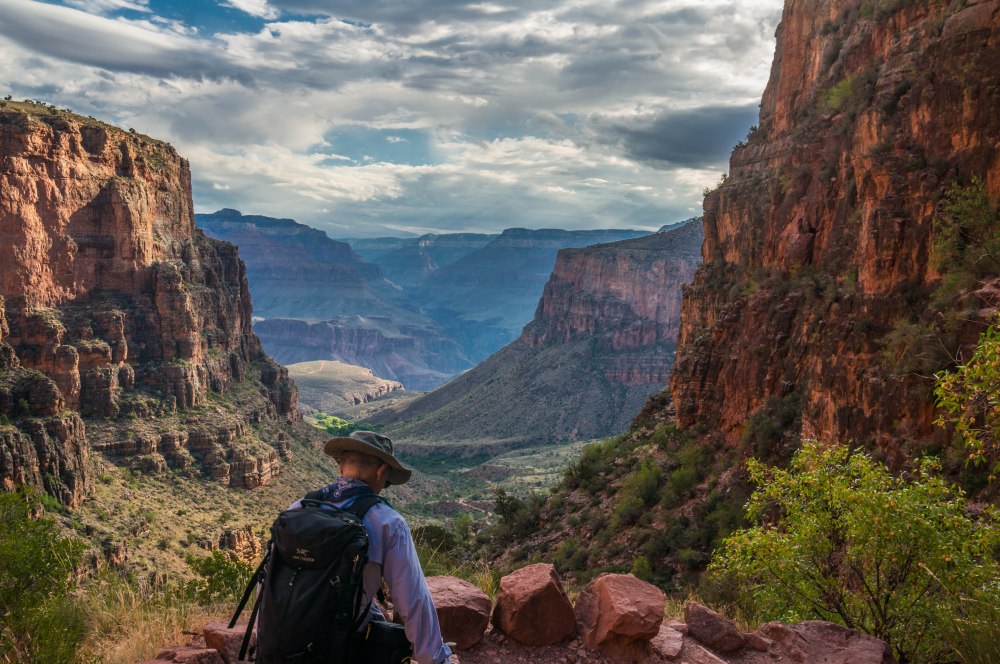 But going up was not. My younger sister and I charged ahead, running along the relatively flat trail. Somewhere far behind us, my parents argued about whether to let us keep running, knowing that we would wear ourselves out for before we hit the switchback’s half a mile ahead. Ultimately, they decided this was a lesson we would have to learn the hard way.

And learn the hard way we, or at least I, did. By the time I hit the three mile rest house I was smoked. As we hiked further and further I started thinking less and less clearly, eventually deciding that the only option was to push straight through to the top without stopping. In retrospect this was stupid, but I was young and exhausted, and for whatever reason it made sense then. At the mile and a half rest house I was at my breaking point. Padre told me to stop and catch my breath, but I tried to push on before he, in no uncertain terms, made it clear that I didn’t have a choice in the matter. I screamed and screamed and screamed at him until finally, completely exhausted, I gave up and sat down. My legs cramped, and my head pounded, but thirty minutes or so later, I’d recovered enough strength to push on towards the top. It hurt, but we made it.

I think a lot about that trip. I learned a bunch of things there, obviously, but the most important lesson is that while you are locked in a struggle you don’t make good choices. In these moments you need an outsider to help you do the thing that is right, but that you can’t see for yourself. I think this is probably where I was before Angie planned this trip too. A summer of 80 hour work weeks and weekend after weekend striving away at my dissertation had left my world very small. Now, home from the break that I hadn’t really wanted to take, I know I have the energy I’ll need to push on.

As I said a few months ago, the small stories of normal people doing normal things outside are missing from outdoors writing. No, this trip didn’t involve anything crazy, but that doesn’t mean it lacked value. Quite the opposite, a quick weekend of being nature-adjacent was restorative, and peaceful, and necessary. With a season of hunting backcountry coues deer quick approaching, a dissertation nearly written, and a new baby close by I know there will be plenty of crazy soon.

But not now. For now, a break.

2 thoughts on “G is for Greer”