A few weeks ago, Curry, Golab, and I were beaten by a mountain. With fall right around the corner, and fearing an entire winter of our failure lording over us, Golab and I decided to rectify the whole thing by returning to Baldy and finishing the loop.

On the drive up, our intentions were clear:

GOLAB: Do you think we should do the loop the same direction we tried it last time?

ME: I think we should do it the exact same f***ing way we tried it last time.

GOLAB: Good, because that was the way I was going regardless of what you said.

Four hours later Golab and I were speeding down the 273 when we saw three large somethings crossing the road.

GOLAB: What are those?

MAX: (thinking)…Well they are too big to be coyotes, and they definitely aren’t dogs… HOLY SHIT THOSE ARE WOVLES.

GOLAB: WHERE IS YOUR CAMERA???

GOLAB: THE PHONE, GRAB YOUR PHONE

In the panic we grabbed my phone off the center dash, dropping in once and frantically snapping as many pictures as possible. In the meantime two of the three wolves skittered under the fence to our left and dashed out of sight. The third stared at us a while before dashing off. In the end, with thousands of dollars of camera equipment just out of reach, this is the best picture we got.

There aren’t a lot of wolves in Arizona.  I’ve been hiking in these exact mountains a ton over the last couple of years (for example, HERE, HERE, and HERE) and I’ve never so much as heard one. I’d like to think the encounter was the universe rewarding us for our stubbornness. Unfortunately by that logic, the fact my camera was in the trunk suggests the universe also frowned upon our hubris. It could be both, I guess.

Regardless, the trip was un-ruinable at this point. As we pulled into the trailhead we were still on our post wolf high. 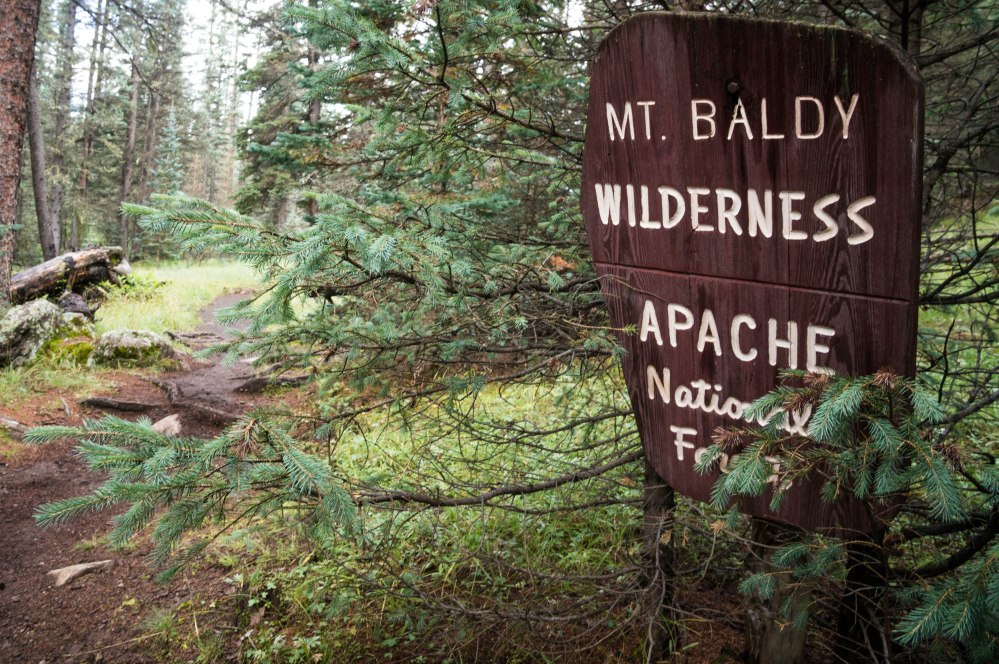 The East Baldy Trail was as wonderful as I remembered it. Starting in wide open meadows, the trail quickly comes to some interesting rock formations that offer ridiculous views. 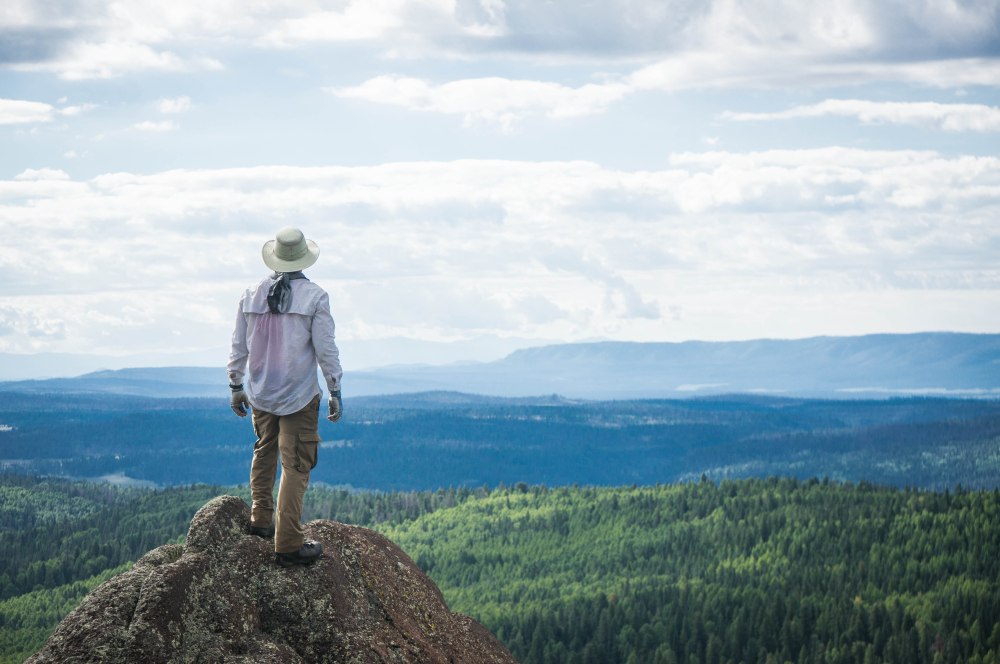 And then it just keeps climbing.

The peak itself is on the White Mountain Apache reservation and is off limits to non-tribal members. As such, the trail turns around at a pretty nondescript spot, just a few hundred yards from the peak.

Brief Aside: I’ve tried to write this paragraph a bunch of times now, and I’ve decided it is best to keep it simple: The peak is on the White Mountain Apache Tribe’s land. If, after all the Apache’s have lost in the last four generations, you think your desire to see the peak is worth disrespecting the little bit of control they have left, chances are that we aren’t going to be friends. Stay off the peak because it is the right thing to do.

Proceeding down the West Baldy trail, I was surprised to see switchbacks.

I’d somehow blocked these from my memory. I’ve hiked the West Baldy Trail dozens of times, but usually only near the trailhead as an entry level hike for newbies. This section of the trail was tight and steep. 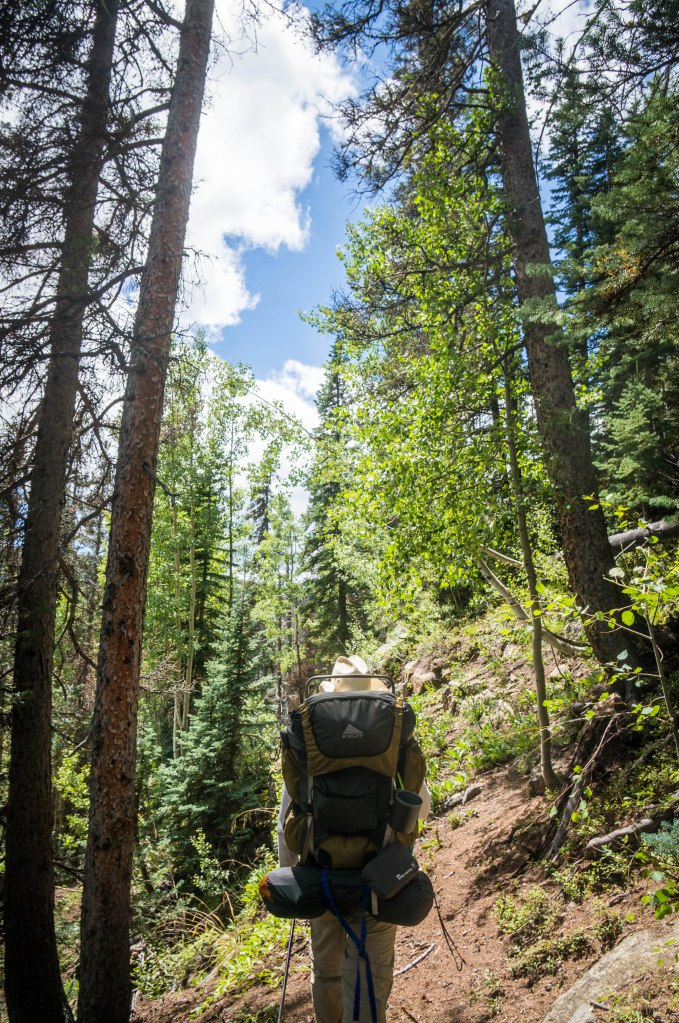 A few miles later descended off the trail to our campsite.

And oh, what a wonderful campsite it is. 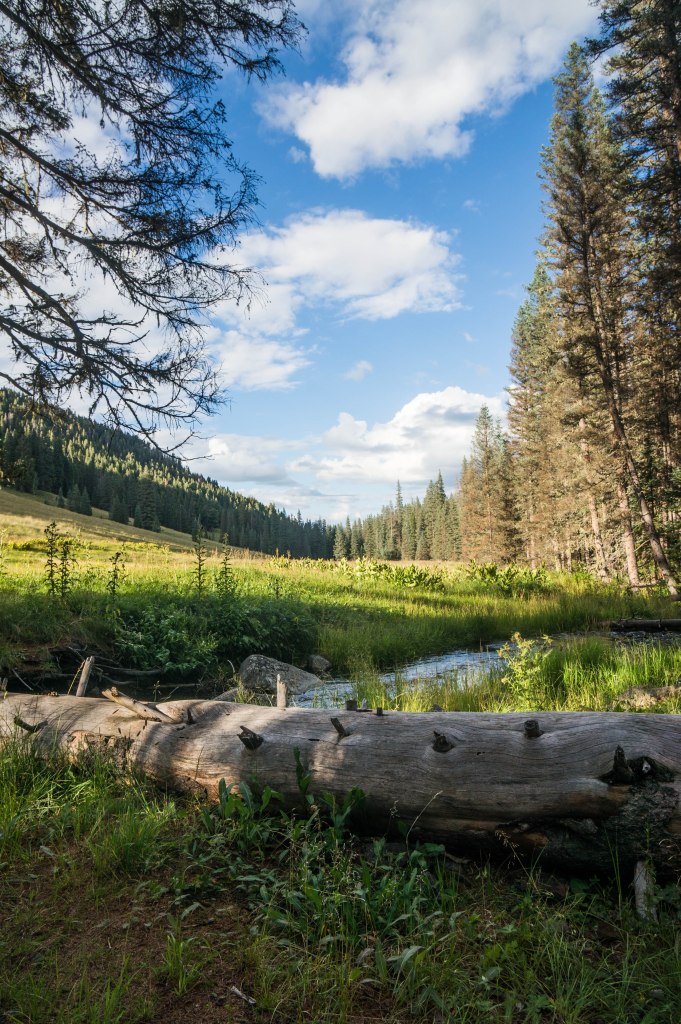 We settled into a lunch of salami, snickers, and cheese. Usually I fish this stream in the afternoon, but AZGFD is asking anglers not to fish it this summer to help support the Apache Trout populations as a problem at the hatchery has caused them to skip stocking this year. Instead, we spent the afternoon watching the clouds roll by.

In the morning the sun was brutal. A full afternoon of watching the clouds roll by left me with quite the headache and an aversion to the sun.

But the West Baldy Trail was spectacular, even if the sun was bright.

We traded meadows and deep, dark fir forests along the Baldy Connector until we came to the car.

At the trailhead, I snapped a few pictures of Golab’s hat, which was on its retirement trip. As we settled into the car, it was impossible not to be pleased. With our biggest demerit wiped off the ledger, we had miles of trail behind us and a winter of hikes in front of us. Another perfect Arizona summer was in the books.

Want to do it yourself? You’ll find all the info you need HERE.

2 thoughts on “Back to Baldy”