He is wonderful and perfect in every way. If you disagree we probably can’t be friends.

But Jack has problem: until this weekend Jack had never been camping before. This weekend Angie and I decided to remedy that. We learned a lot in the process, so rather than a typical trip report, I thought it might be more fun to write this as a guide to taking toddler’s camping. So, here goes nothing:

Our initial plan was to head someplace in the White Mountains, between the headwaters of the Little Colorado and Black Rivers. This area should ring a bell for long time readers as it has been one of my go to spots to escape the heat this summer (For example, read about FISHING and BACKPACKING the area). With an average elevation between 9,000 and 10,000 ft, tons of different things to do, the Whites are basically the perfect summer getaway.

Angie and I started to panic. Sure, we didn’t mind a little rain. But three full days stuck in a tent with a toddler seemed sounded like a nightmare. A couple hours of frantically searching the NWS point forecasts I found the answer: Mt. Graham.

Located in Southeastern Arizona, Mt. Graham is a “Sky Island,” so named because it juts out of the desert floor so high, and so fast, that the top is completely different, and mostly isolated, from the surrounding landscape. Driving up the Swift Trail (the only road into Mt. Graham), you cross from desert, to grassland, to chaparral, to pine forest, to dense almost-Pacific-Northwest-Rainforest over a scant 30 miles. To say it is jaw dropping is an understatement.

Unfortunately selecting Mt. Graham required me to break on of my cardinal rules of camping: NO ORGANIZED CAMPGROUNDS. Call me anti-social, but I HATE organized campgrounds. I go camping to for peace and solitude, not to sleep feet away from some dude running a generator. But, faced with the choice of being trapped in a tent with a toddler or having some annoying neighbors the right answer was obvious.

About 7 in the morning Angie, Jack, the dogs, and I piled in the Mighty Subaru and took off for the Solider Creek Campground. As organized campgrounds go, it wasn’t such a bad one. Back in the 1930s the CCC lined many of the sites with large boulders, which gave you at least the illusion of privacy. By 1PM we were all set up. 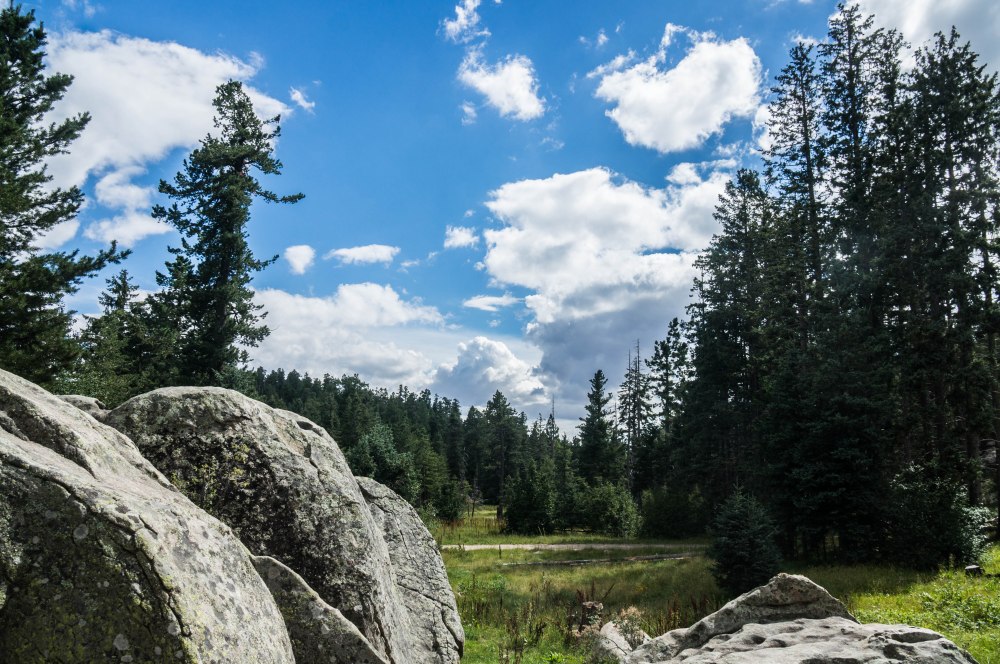 STEP 2: Bring Stuff to Do

As soon as we were set up, Jack went right to doing what he does best: being adorable. 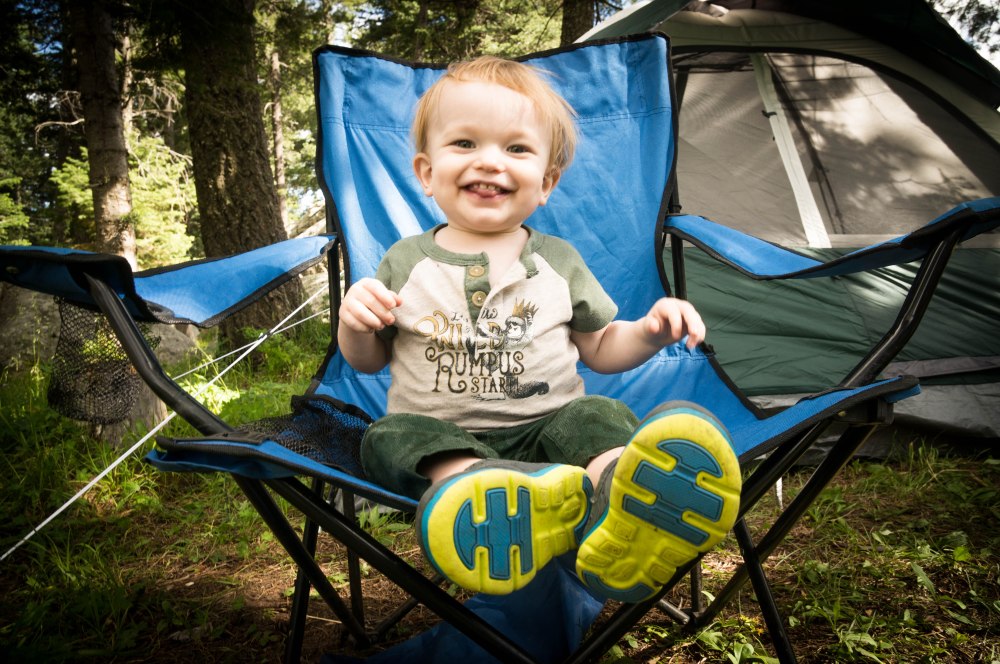 He was a little tentative about all the “nature” at first, but within an hour or so he was running around like his good old self.

But Momma and Dadda can’t run around forever. That’s why the pack-and-play with a few of Jack’s favorite blocks were a non-negotiable.

This bought us an hour or so to catch our breath while after a crazy morning.

Jack proved he was a true Arizonan when he picked up “hot” as one of his first words. But, as the sun began to fall, and the temperatures dropped with it, Jack encountered a new feeling: cold.

Now it wasn’t arctic-cold, but as the temps fell from the 60’s to the 50’s Jack started to fuss. At first Angie and I were confused, but after a few minutes of trying to cheer him up with an absurd number of toys it finally dawned on us and we bundled him up in his little Patagonia Snap-T. 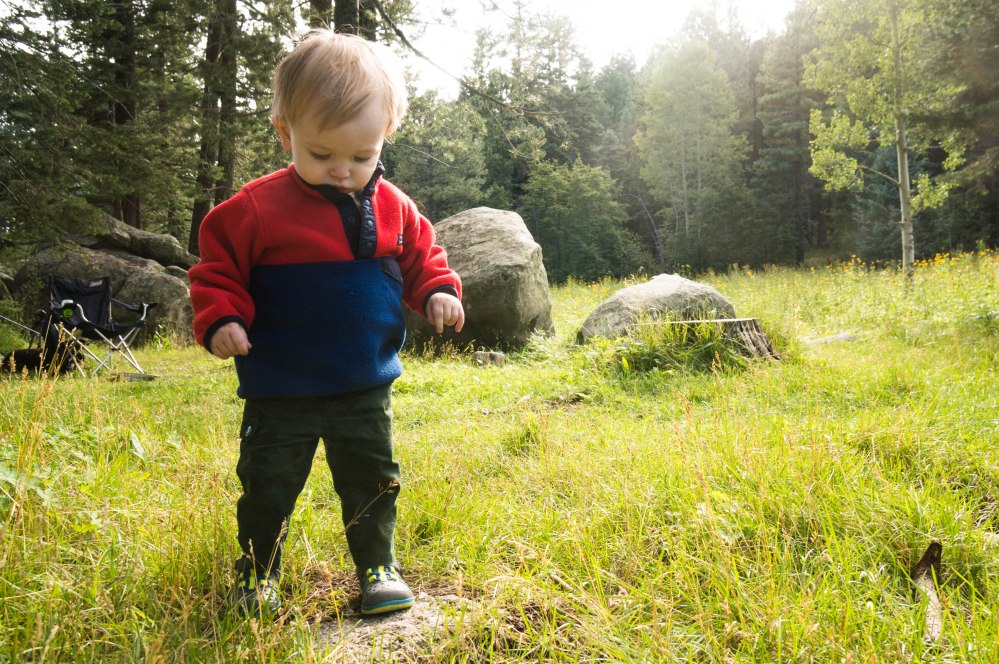 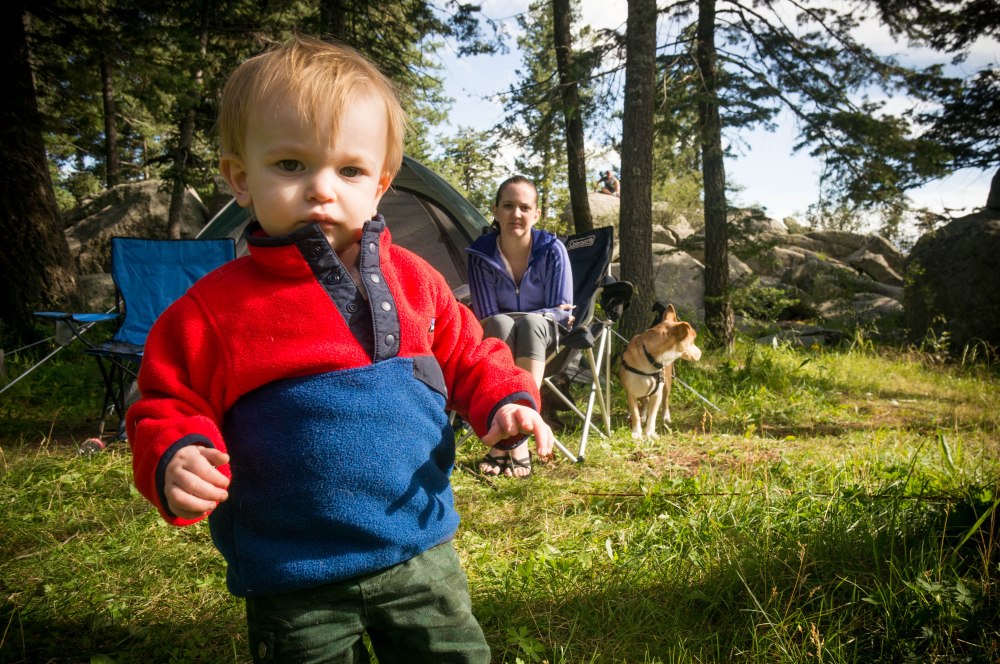 After he warmed up, Jack was right back to his usual self and we were back to playing. Lesson learned! 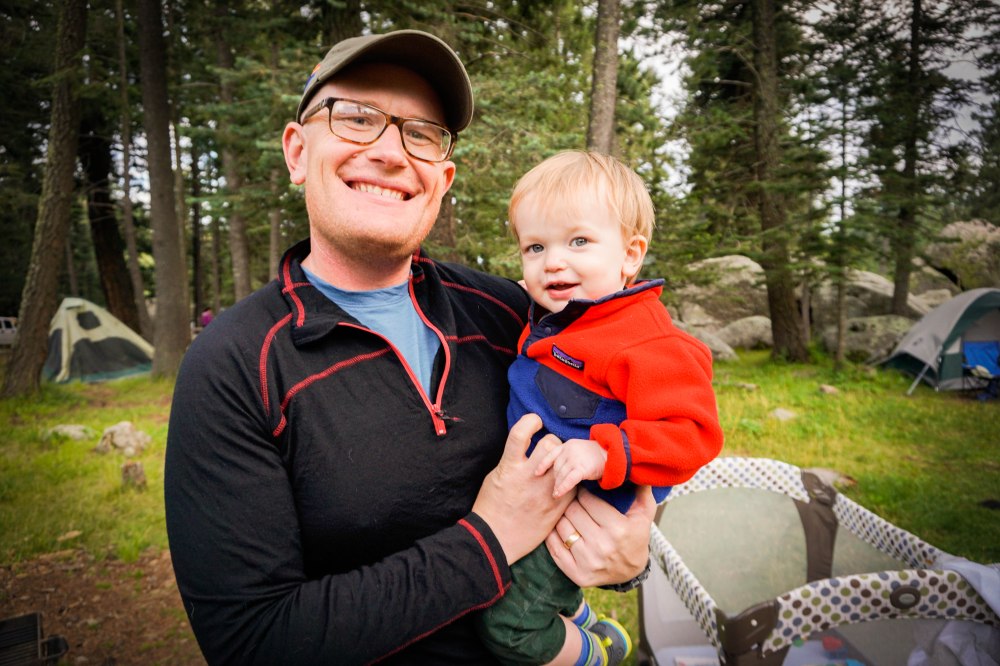 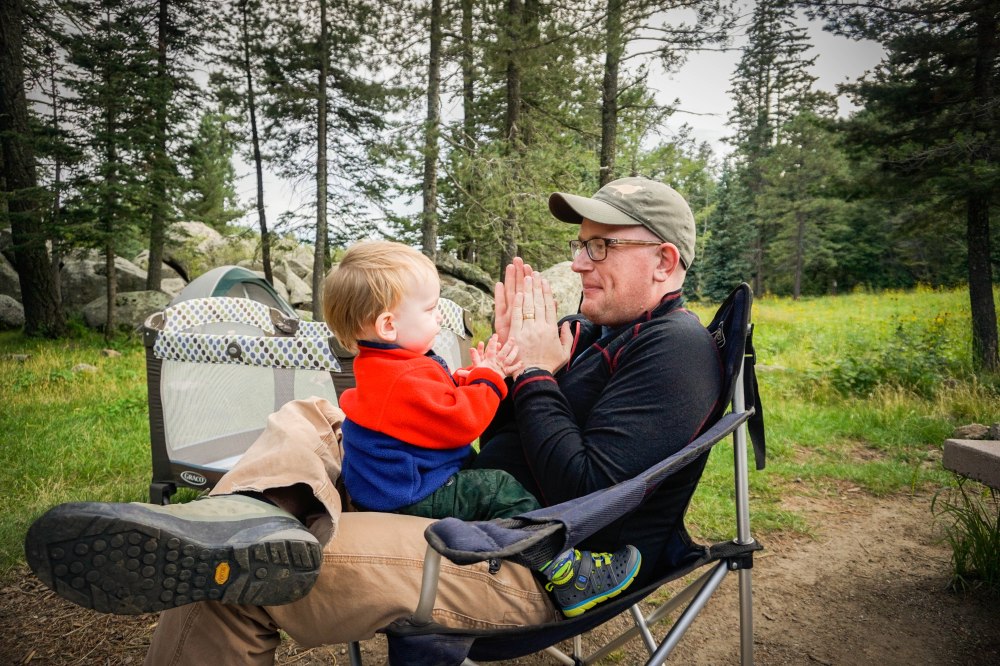 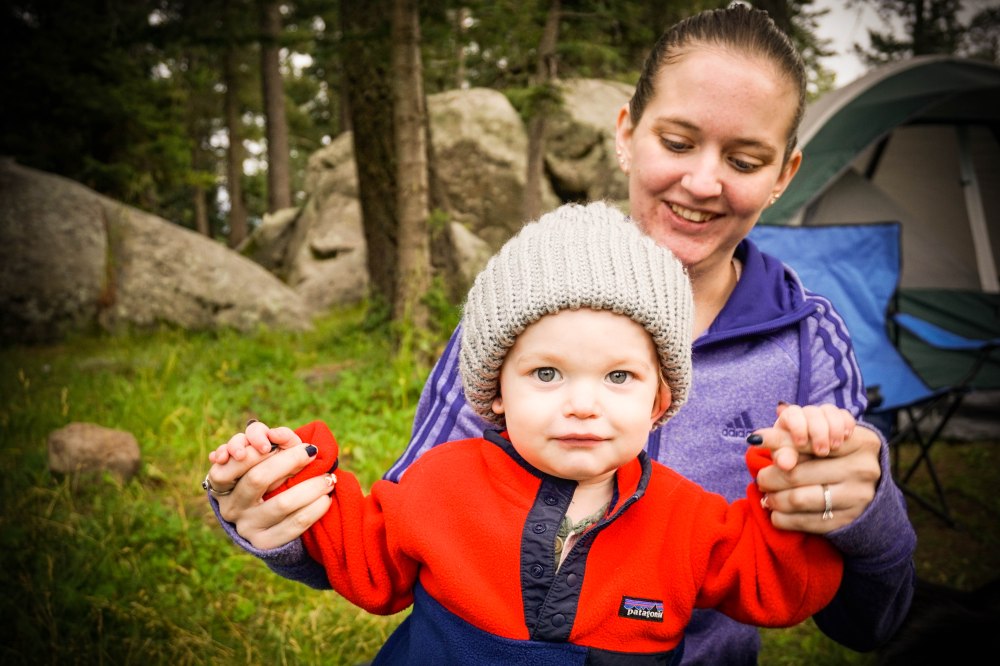 As night settled in my most favorite vest was pressed into service as a sleep sleep sack. Probably not what Ibex had in mind when they designed it, but for a tosser/turner like Jack it was absolutely perfect. With his arms poking through he couldn’t get wrapped up in the thing, but he also wasn’t wrapped so tight to feel couped up. 10/10, would vest sleeping sack again. 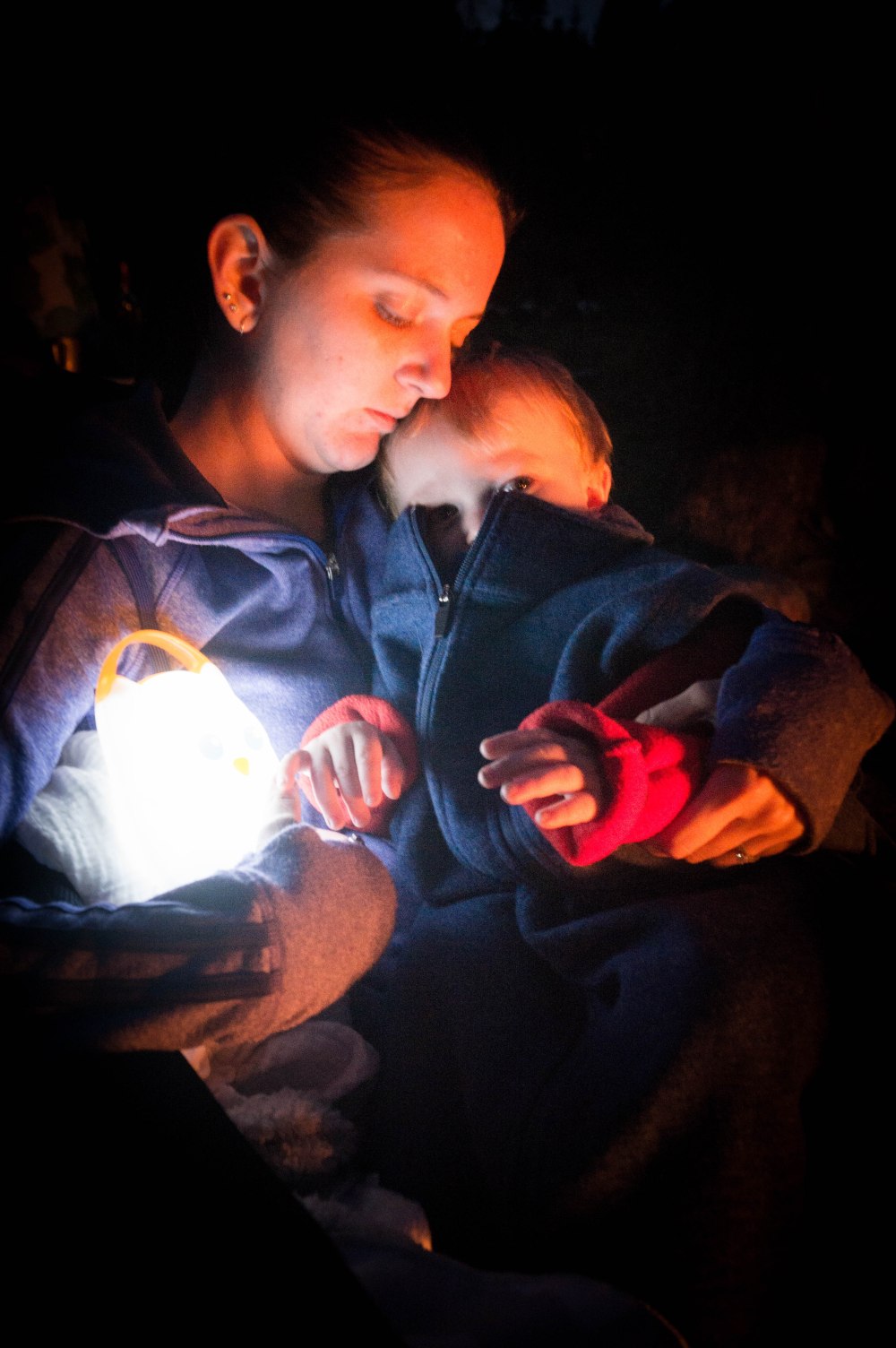 As we settled into the tent Jack got a little fussy. After a while I moved him into the sleeping bag with me. Hot toddler pressing down on me, zipped up a little too tight in the sleeping bag all I could think was Man, this must be what being pregnant is like. THIS IS TERRIBLE. But with Jack softy sleeping I didn’t worry too much about it.

Regular readers of this blog know that I don’t really like just sitting around in camp all day. Relaxing has its merits, but honestly I get bored. You know who else gets bored sitting in camp all day? Toddlers.

Put yourself in their shoes. For one, car space is limited so Momma and Dadda probably didn’t bring a ton of toys. Second, after Momma and Dadda stuck you in a car for hours on end, you got to a sweet campground and they won’t even let you explore without supervision. Lastly, because Baby Work (e.g., daycare) isn’t as stressful as adult work, you probably don’t want to unwind. Nah, you want to do stuff.

And that’s while I planned a kinda ambitious hike down the Ash Creek Trail. This trail is straight up beautiful, but a quick perusal of the NFS website shows that Ash Creek is labled as “Most Difficult.” Angie isn’t a regular hiker, so I thought this was a fact best witheld from her. Don’t worry, I’m 90% sure she won’t kill me when she reads this.

So we stuck Jack in our Osprey Poco Premium (full review coming someday, TL;DR not super impressed) and took off down the hill. The trail starts is a super dense stand of high forest

Before eventually opening up into some meadows 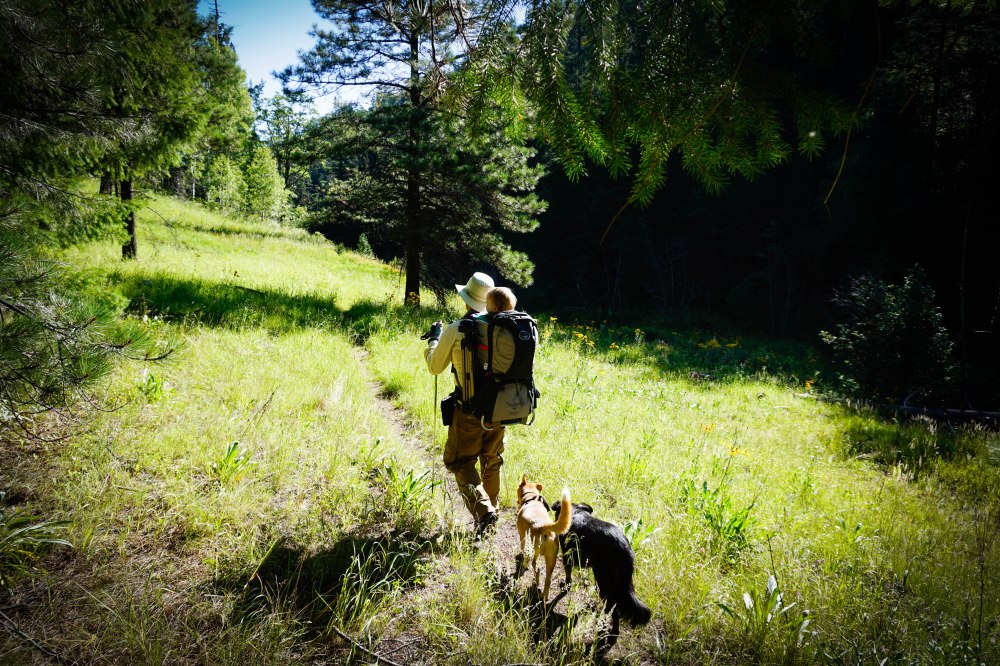 Jack was an absolute boss, putting up with the steep sections fairly well. 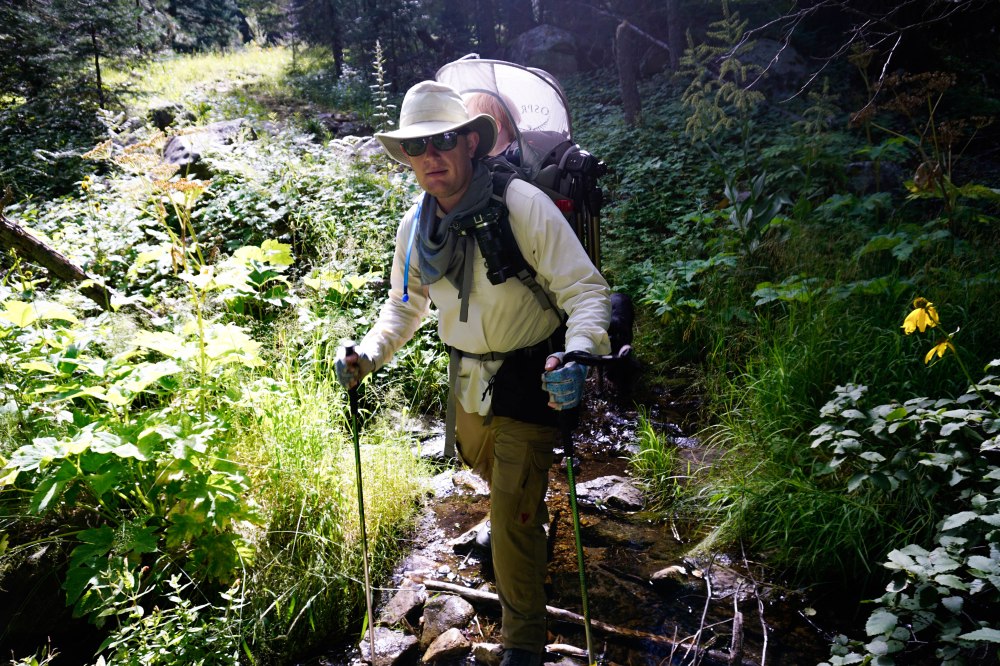 The trail was all its cracked up to be, with Ash Creek starting as a trickle near the top and turning into a veritable torrent within a couple miles. However, what goes down…

…must go up. Jack’s nap time was coming up soon, and while we are adventurous we aren’t idiots. No one wants to see a toddler miss his nap.

They say being a toddler is all about discovery. This is undoubtably true. Unfortunately, not all discoveries are good. For example, humanity would have been better off if Jack hadn’t discovered that my ears and hat make perfect reins.

Luckily steering Daddad up the trail is exhausting, and Jack passed out.

A few hours later we were back at the car and the little Jackamundi was not happy to be disturbed from his slumber. 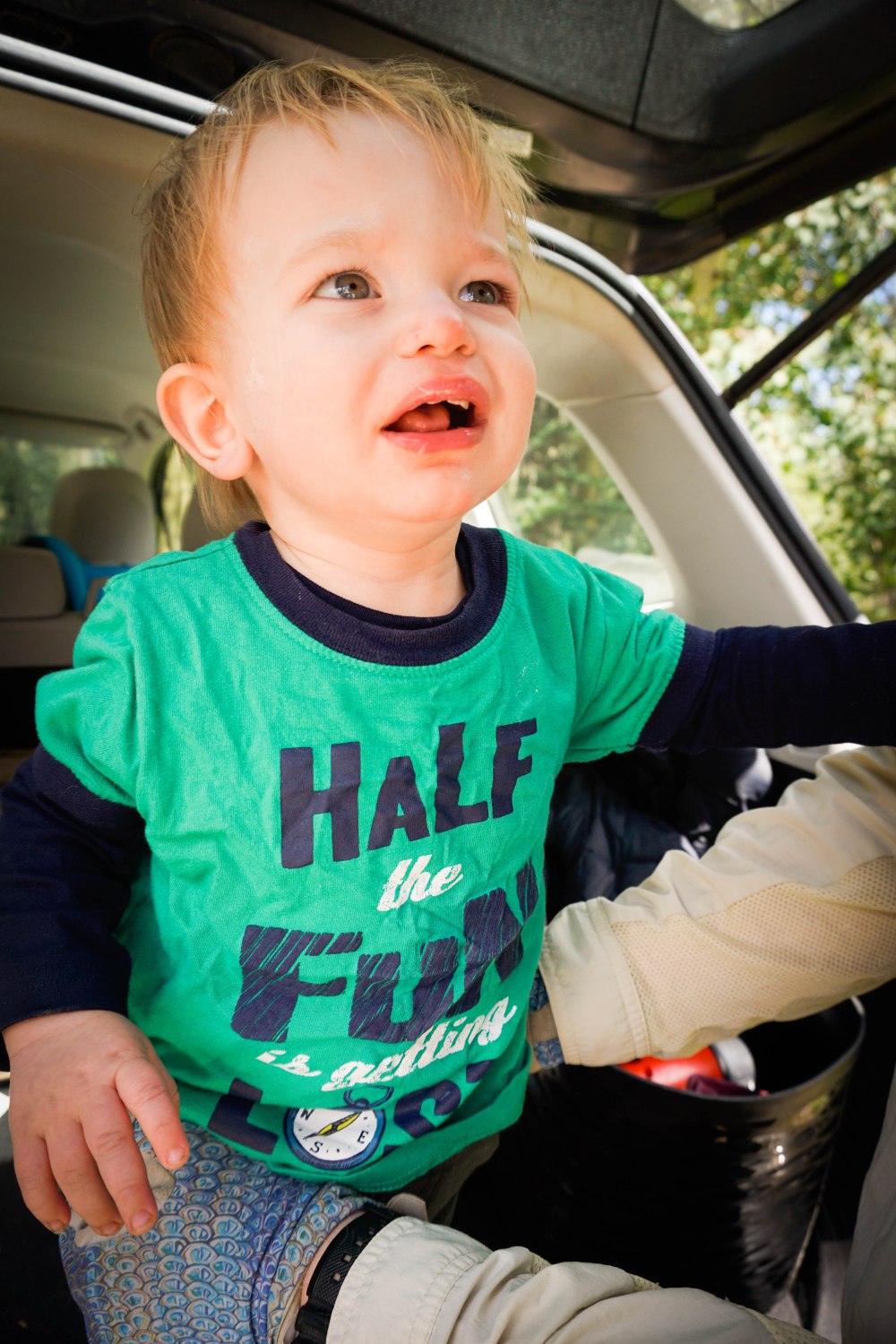 STEP 5: Quit While You’re Ahead

Back at camp, Jack continued his war against hats as the clouds started to build. 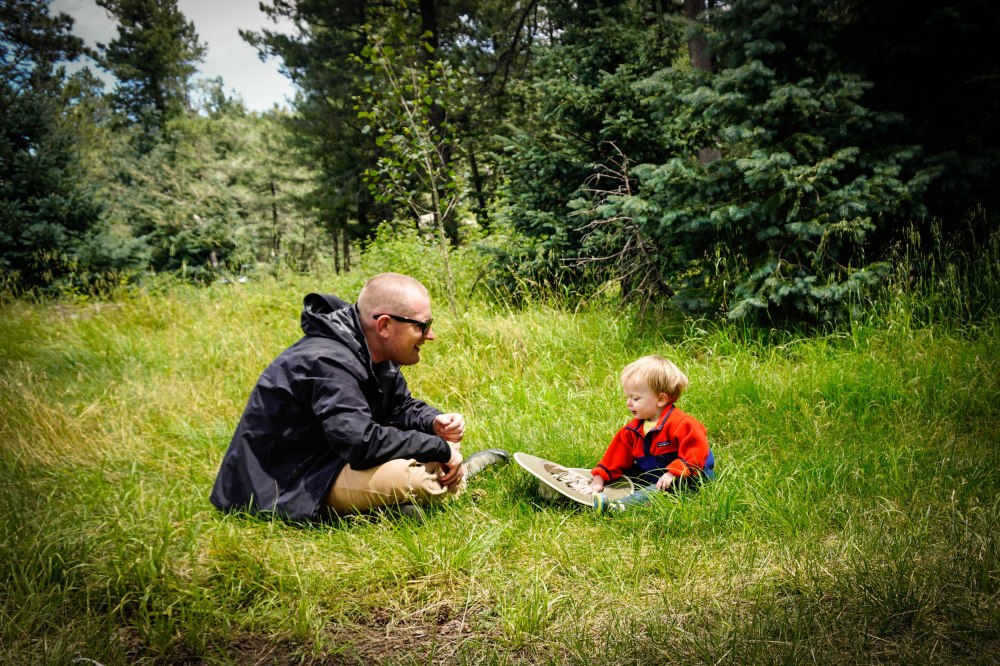 As the afternoon moved in, Jack got fussier and fussier and the clouds got darker. After a couple of hours of unsuccessfully trying to get him to lay down a couple things dawned on me:

The trip so far had been incredible. Jack played in, and loved, camp. The hike had been fantastic. Angie and I had gotten to really decompress for the first time in months. Everything left on the trip were things that were going to lessen it, not make it better.

I sat around thinking about this as the first raindrops fell. Then the rain got harder. Then the rain turned to hail. Then the hail got bigger. Suddenly I had a really out of character thought:

Why don’t we quit while we’re ahead?

Those of you who know me know this is not how I usually roll. Jesus, one of my most popular posts is about how I’m really bad at knowing when to turn around. But in that moment all I could think about was that we were here to have fun, we’d had fun, and getting pummeled by hail is not fun. I talked to Angie and she agreed, we should head home.

After throwing everything together as quick as we could, we raced the storm down the Swift Trail. I was spending most of my energy trying to keep the car on the road in the blinding rain, but the few moments we had to talk, Angie and I both expressed feeling guilty. We aren’t quitters, and we wondered whether leaving was the right thing.

Then at the bottom of the mountain, we looked back and saw this:

And we knew we’d made the right call. We’d set off on this trip to teach Jack about nature, but looking back on the mountain, fully engulfed in a ridiculous storm, it was obvious we’d learned a lesson too: when your camping with your kids knowing when to stop is just as important and knowing when to start.

7 thoughts on “So you want to take your toddler camping”