For the last couple of weekends I’ve had big plans. Canyoneering Hell’s Gate, climbing the tallest mountain in Arizona, day hiking in my favorite canyon in the world, all planned and all scotched by our recent monsoon rains. On Saturday I’d had enough. I had to get out.

I’ve also had enough of long drives. My last two outings (HERE and HERE) have been 4-5 hours from home, right on the border with New Mexico. The problem with staying close to Phoenix in the summer though is that everywhere close to Phoenix is hot. After much thinking I decided to characteristically ignore my summer hiking guide and try a little morning fly fishing on Wet Beaver Creek, heading home before the heat got too brutal.

My plan was to hike in in the dark so I could be set up on the water at dawn. At about 4:45 I arrived in the parking lot, threw on my headlamp, and took off down the reasonably flat trail. One thing I’ve always loved about hiking in the dark is you get a really good sense of how many animals are actually all around you. Mammals in particular are most active in the pre-dawn hours, and their eye shine makes them easy to pick out. Moving down the trail at a slow jog I was enjoying the sounds of the trail. Or at least I was until my headlamp caught the light of a set of eyes 50 feet or so to my right. A particularly large set of eyes. Staring right at me.

I’m a curious guy and I’ve taught a class about mammals on and off for the last six years, so while your reaction to seeing a giant set of eyes staring right at you in the darkness might be to briskly move in the opposite direction, all I could do is stop and stare. I quickly turned my headlamp to its brightest setting, and kept moving the light back and forth to make out the outline of whatever was staring at me. Whatever it was stuck low to the ground, and I couldn’t quite make it out. We continued our staring contest.

Then, right as I was ready to give up and move on, the shadowy set of eyes stood up and I finally got a good look at it.

I didn’t even realize I was screaming this until it was over.

I’d been staring at a mountain lion, not 50 feet away, for a solid five minutes. This raised a complex set of emotions: On one hand, child-like wonder, on the other, I DON’T WANT TO DIEEEEEEEEEEE. I’d love to think the mountain lion had similar feelings about me, but he just sauntered away, clearly bored while I was still transfixed on him. You win this round, mountain lion.

After a few moments, I gathered myself enough to continue down the trail. Walking at a reasonable pace, again my headlamp caught another large set of eyes, this time to my left. These looked a little different from the first set, but the eyes were moving toward me and my adrenaline riddled brain was pretty sure the mountain lion had come back to finish (start?) the job. All I could think was:

Except, instead of “Two Men” entering it would be a kinda chubby white guy against a giant fucking mountain lion. I didn’t like my chances.

So I stood there for a moment, trying to convince myself that it would all be okay. Mountain lions almost never attack adults, Rational Max tried to convince Terrified Max. But as I looked into the darkness and all I could see was a set of eyes walking toward me. Terrified Max didn’t really care about statistics. All Terrified Max cared about in that moment were his mountain lion fighting skills.

As the eyes walked closer and closer to me, I began to notice that this mountain lion didn’t look quite right. It had big ears. And it was taller than it should be. And why is it’s neck so long? And suddenly it dawned on me:

Soon the sun came up. This made me happy. 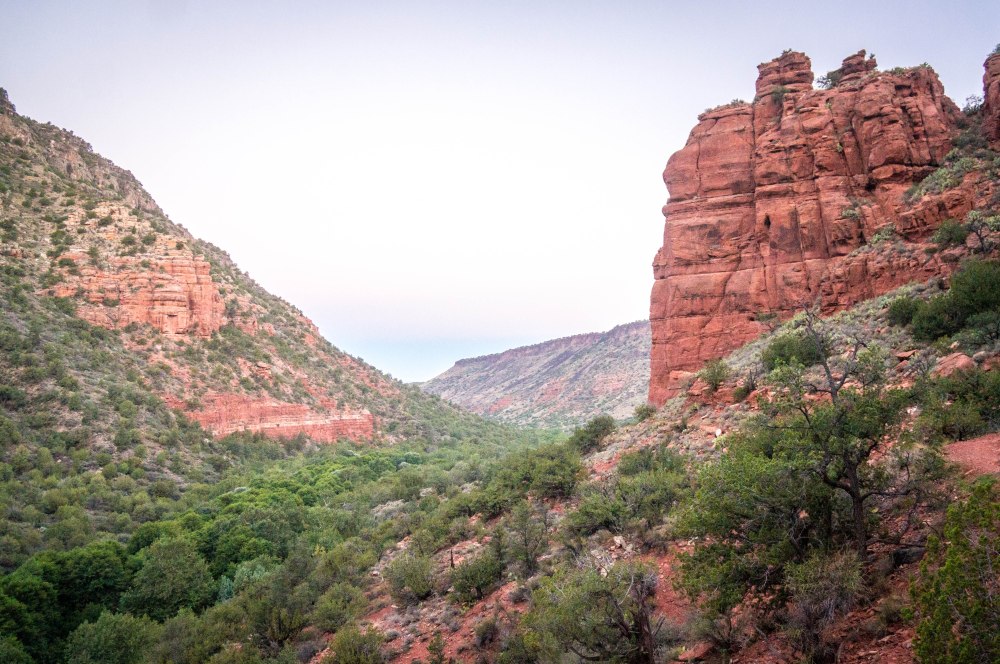 In the pre-dawn light I began to realize this place was way prettier than I remembered and soon I came to my first fishing spot, “The Crack.” I tossed my fly up around the bend of the creek, and drug it through a big, deep hole I could see was absolutely chuck full bass. 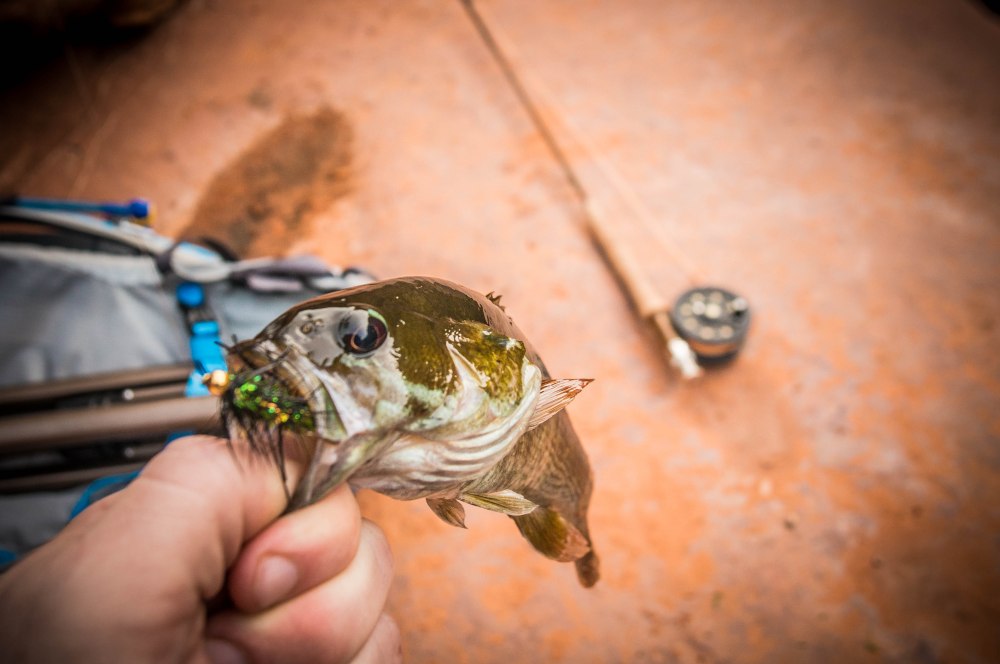 My poor little wooly bugger was getting obliterated with solid strikes on two out of every three casts. A few of these were decent sized, but the vast majority were under six inches.  After 45 min and probably a dozen fish I heard the first hiking group coming up the trail and decided it was time to move on.

As I moved down to my next fishing hole I ran into the group of incoming hikers. We greeted each other, and I thought to myself Huh, the girl in the back looks really familiar. A couple days later the two of us would put it all together: it turns out that she is actually one of my favorite follows/followers on Instagram, @Knzeli. I know it 2016 and all, but I’m still blown away when I run into people from the internet IRL. It’s amazing.

The next hole, just downstream of The Crack didn’t turnout so well, so rather than turning the trip into a pusedo canyoneering trip and swimming downstream I decided to pack up and head back via the trail.

Being a sentimentalist at heart, I had to fish the spot we used to camp when I was a kid. Things have changed since then: what used to be a wide open spot is now wonderfully dense with a large, low tree branch shading the entire creek. The recent camping ban in the area has obviously improved the ecosystem. Huge props to USFS for implementing it. 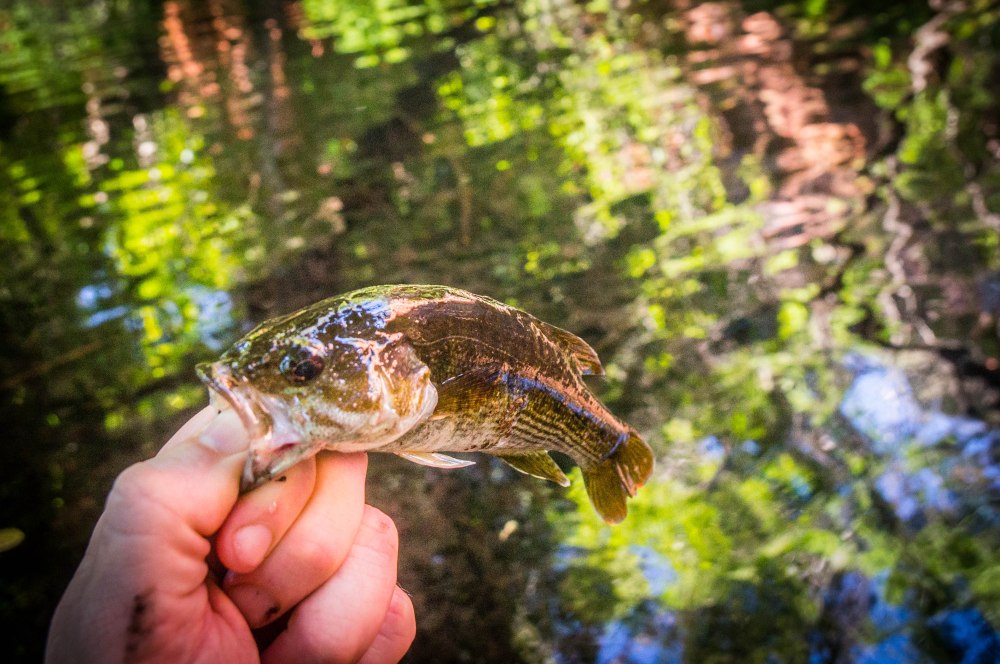 The first couple of casts were successful, bringing in a six and an eight incher. After than I ran into a problem: I’d cast, but the moment my fly would hit the water tiny bass would hit it. I couldn’t keep them off my flies long enough to catch anything worth keeping. After an hour or so of this I decided it was time to call it a day before it got too hot.

About a mile in a beautiful gray fox ran across the trail, punctuating the day nicely. From here things rapidly went downhill, both literally and physically. As I walked closer to the car the crowds of hikers grew thicker. And I do mean crowds. I’ve heard horror stories of the crowds at nearby Fossil Creek, but since I almost exclusively go there in the winter I’d never seen them in person. Though I’ve seen West Clear Creek at its worse, I (wrongly) assumed Wet Beaver might be spared since their is no creek access at the parking lot. To see hundreds (thousands?) of people moving down a single trail on a single day was breathtaking.

But I didn’t let them bother me. In six hours I’d seen a mountain lion, a deer, a gray fox, and caught more fish than I could count. Hard to complain about a day like that.