Months ago, just as the long, hot, terrible Arizona summer was winding down, I had plans. Tons of plans. So many plans that my plans had plans. I was going to hike the Superstitions, a lot. A few trips to the Grand Canyon were lined up. And, most importantly, I had a pair of snow shoes so I could go to my favorite places after the roads were shut down for winter. Lots of plans.

Then my knee exploded, and my WINTER HIKING EXTRAVAGANZA quickly became a WINTER SITTING AT HOME EXTRAVAGANZA. I got to go fishing a bit (as you lovely Instagram followers already know, hint hint), but mostly I sat at home. And now, just as my knee is recovering, winter is getting crushed by weeks of record temperatures. Never one to be stopped by little things like medical-ability, or long-term-knee-damage, two weeks ago I packed up my snowshoes and aimed for one last ditch attempt at a winter adventure.

The West Baldy Trail is one of my all time favorites. Falling between 9,000 at 11,500 ft of elevation, Arizona’s second highest peak is a perfect place to escape the summer heat. It even has wolves. Like real, actually wolves. Of course, you already know all this if you keep up with the blog. What a place: 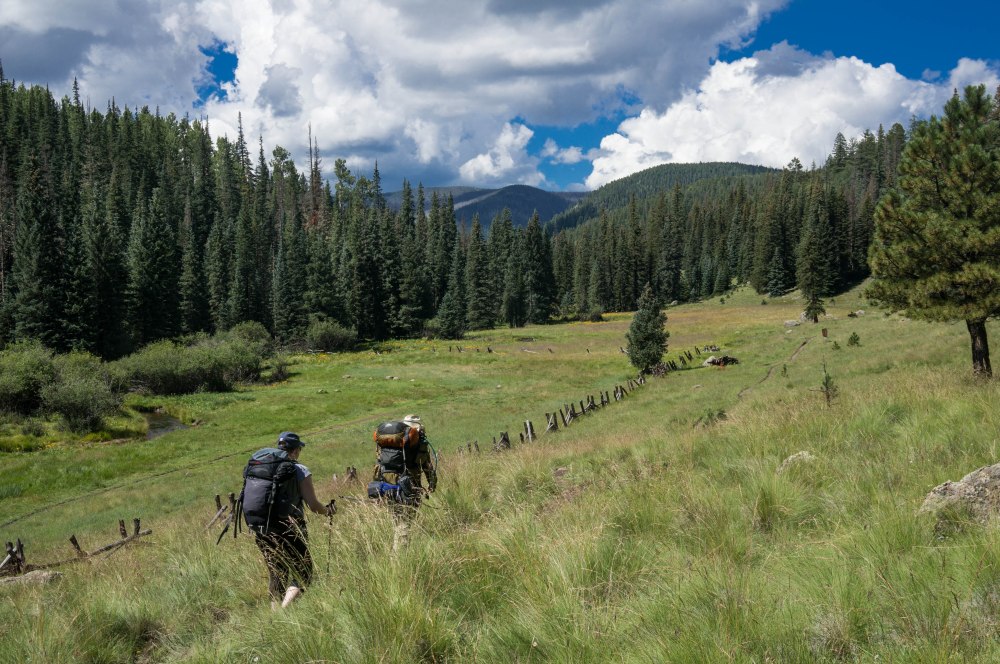 So, at 2:30 in the morning I loaded up all my gear in the Forester and set off for the Arizona/New Mexico Boarder. When I arrived:

Yowza. I know that to you people who live in the frozen tundra that is the East Coast/Midwest 1 degree isn’t that cold, but for a desert rat like me, 1 degree isn’t just cold, it is absurd. It can’t be that bad, I thought, pumping myself up. My first step outside proved me wrong: Nope! 1 degree is really cold.

Access to the trailhead is off Highway 273, which shuts down for winter about 3 miles from the trailhead. The Highway is frequented by snow mobiles, who kept the snow packed nice and tight, making for a quick jaunt to my turnoff…

…where I got the first indication that this trip was going to be different. Not a single foot print went towards the wilderness area. The trail register showed more of the same: 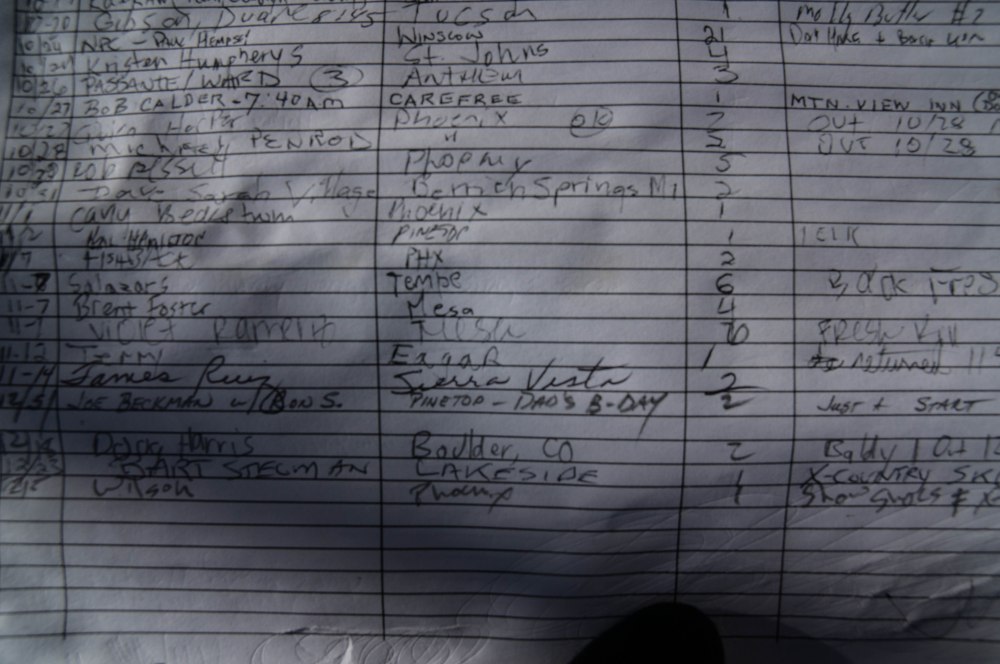 No one had been back here for months! How great. Quickly, the problems started:

Trail finding is one of my (only) true talents. Yet, maybe because I’m just not used to the snow, I struggled with this usually really easy to follow trail. Soon I started doing it the old fashioned way: map, compass, and a good sense of where I was trying to get to. On the upside, my tracks were deep enough finding my way back would be easy. 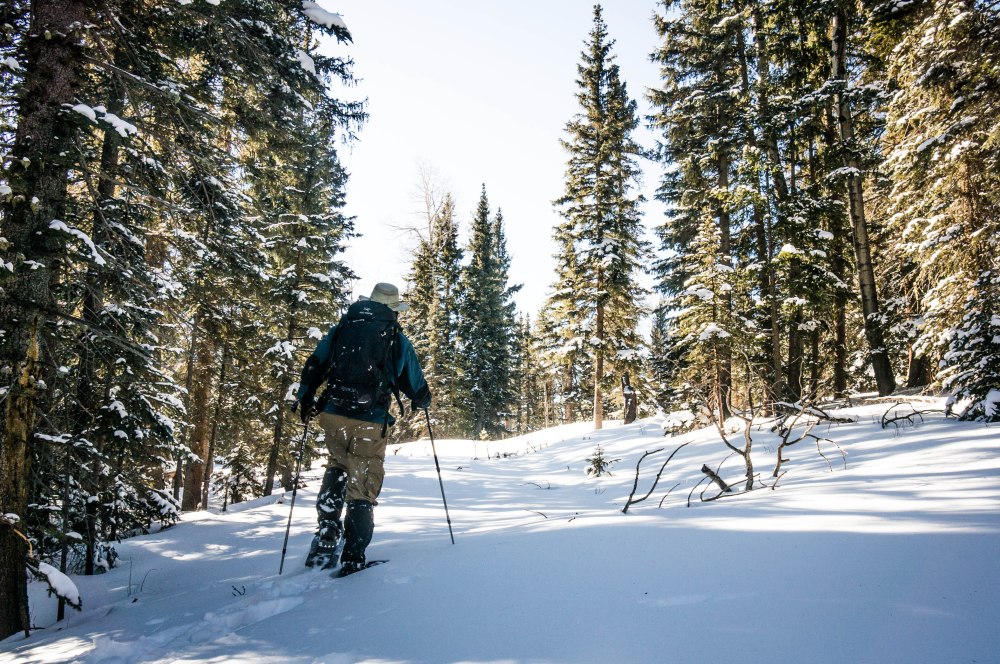 All the while, I was forming some strong opinions on snowshoes. Mostly, THESE THINGS ARE TERRIBLE. I’d enjoyed cross country skiing as a kid, but my MSR Evo snowshoes, even with the extra flotation tails, still had me sinking 6-8 inches into the powder with every step. My opinion did start to soften when I broke through the densest part of the forest and realized I’d have the whole West Baldy Valley to myself.

My goal for the day was to make it to my usual campsite, just at the very top of the Little Colorado River. Quickly though, the snow started getting deeper, and the trail started getting steeper. I wasn’t moving very fast. Knowing I promised Angie I would be home for diner, I decided to turn around after a quick lunch a mile from my desired destination.

8 miles of breaking all my own trail at 10,000 ft had left me beat. Worse, I was frustrated that I hadn’t made it to where I wanted to go. This tired-frustration was made worse by a frozen apple for lunch, and suddenly I was muttering to myself about how these-stupid-snowshoes-didn’t-work-worth-shit and I-bet-I would-be-better-off-without-them. This confident, angry Me decided that he would take off his snowshoes and just try walking. I DON’T EVEN LIKE SNOWSHOES, Angry Me thought. Then

I sunk in up to my chest in snow.

And I realized that snowshoes are actually great.

I dug myself out, a much colder and calmer man. Wet, my hands were burning. I needed to get moving, so I threw on my extra gloves and headed back for the car as quick as I could. Suddenly I realized I was moving really fast. Whoa, Snowshoeing down a beaten path, easier than busting your own trail! 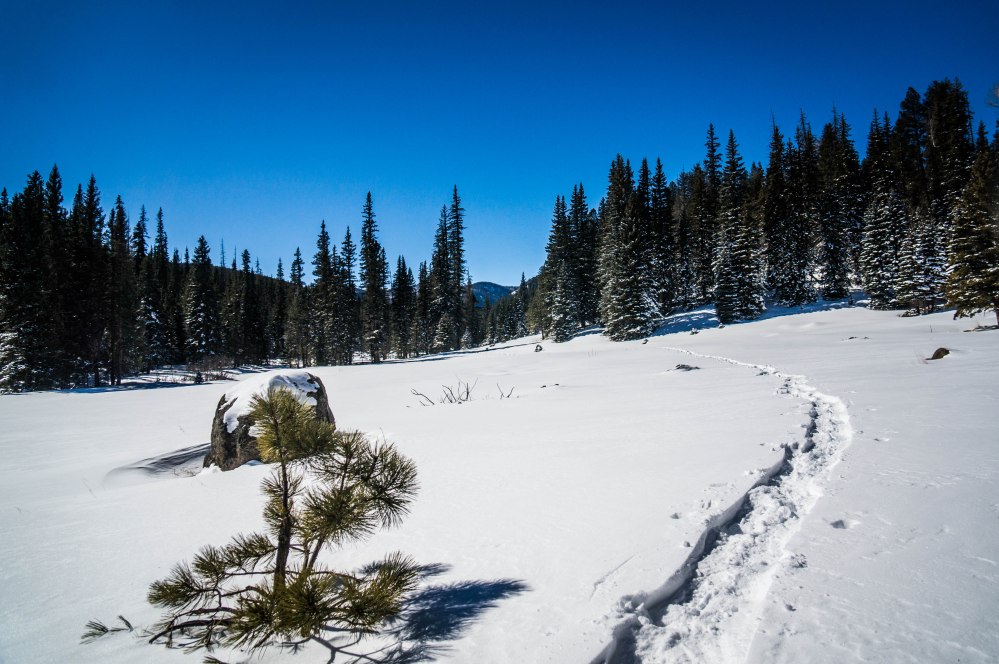 Soon I was back to the car. To summarize, important life lessons from this trip were:

And that’s the kind of analysis you just can’t get anywhere else.

Max Wilson is a graduate student studying ecology at Arizona State University. He write here at Lesser Places, occasionally for Backpacker.com, and even more occasionally for scientific journals. You can follow him on twitter@maxomillions.

10 thoughts on “Max tries snowshoeing, isn’t very good at it”